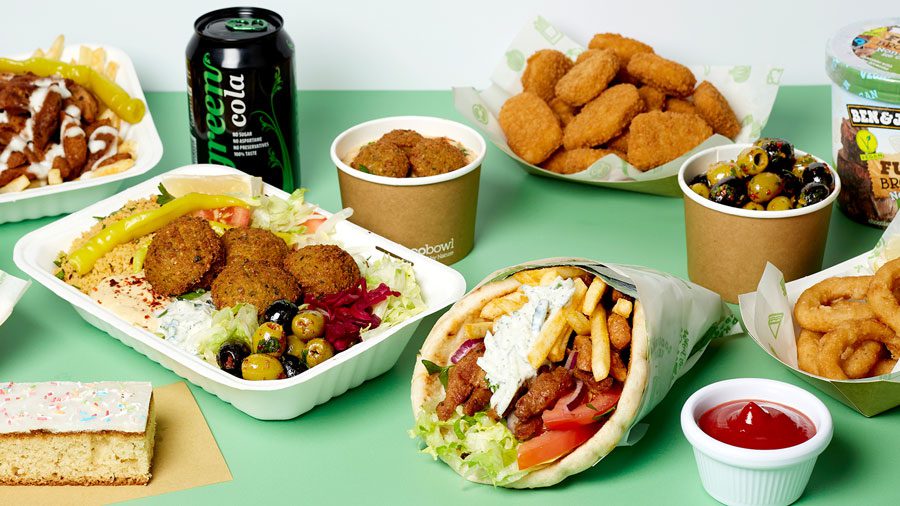 ‘A vegan kebab? A vegan kebab?’ You’re not the first person to screw up your face when you heard all about our award-winning vegan doner kebab. “What on Earth is in a vegan kebab?” It’s a good question – and you’re asking the right people!

To many, a meatless doner kebab is like summer without sunshine, like a festival without music. Only in this case, our ‘good karma kebab’ is all the better for the magical, mysterious, meat-free upgrade. And luckily, plenty of other people agree.

That’s why in today’s blog post, we’re going to explain what makes the head-scratching stop and the meat-free kebab craving begin. And when that craving kicks in, you can get your hands on a delicious vegan kebab at any of our Shoreditch, Camden, Croyden, Battersea, or Brighton What the Pitta branches.

But that doesn’t mean that we know them inside out! Far from it – especially when we can barely remember ordering them.

Regardless, you’re well aware that a doner kebab involves meat. Quite a bit of it. Kind of like the way that you know there’s dairy in mac ‘n’ cheese, or seafood in fish and chips.

Doner kebabs shops are a mainstay on British streets and, unfortunately for them, they’ve unfairly developed a bit of a poor reputation. Traditional doner kebabs – berated as greasy, salty, fast food feasts – are, thankfully, making a deserved comeback as a delicacy delight on Britain’s multicultural dining scene.

Just like the other British favourites we’ve mentioned, animal-based and meat-free alternatives are becoming more and more inventive, and the results are only getting better. Tastier, healthier, and more sustainably sourced meals are becoming easier to find and cheaper to buy.

So let’s take a closer look at how our good karma kebabs compare with the traditional British doner kebab classic.

Back to Basics…What’s in a Traditional Doner Kebab?

We’ve already explained to you what a true doner kebab is. And the quick answer is that there’s no ‘true’ doner at all! There are so many different types of doner kebab that the answer is always going to vary.

Between the meats, the sauces, the breads, and the fillings, there are countless different types of doner kebabs that have become popular throughout the world.

Strangely, the meat filling is one of the more consistent doner kebab ingredients. The word ‘döner’ literally means ‘rotating’ in Turkish. So far so good – we’ve all seen the glistening meat rotating on a skewer, charring the exterior and cooking the inside to soft, juicy perfection.

But it turns out shawarma and gyros are cooked the same way – and in both Arabic and Greek respectively, those words mean ‘rotating’ too! However, those foods follow Greek and Arabic tradition as opposed to Turkish tradition, so they’ll include more herbs and spices with less sauce. Regardless, whether it’s lamb, beef, or even chicken, there’s always meat in a traditional doner kebab.

The ‘carb’ element of the doner kebab varies quite a bit as well – and this one isn’t restrained by language or by nationality. As you’ve already guessed (clever you), we’re pretty fond of the pitta bread that we make from scratch. But traditional kebab shops could use anything from flatbread all the way to naan bread or durum, or they could even mix it up with rice instead.

Then there are the sauces and the fillings to accompany the meat inside the bread or pitta. You probably shouldn’t get us started on sauces. Chilli sauce? Garlic mayo? Mint yoghurt? Mustard? What about kebab sauce? What’s even in kebab sauce? And did you know that in the Netherlands they use Gouda and sambal?!

Add any combination of cheese (we’re looking at you feta), sauerkraut, jalapenos, olives, onions, tomatoes, chillies, cabbage, lettuce, and even chips and they’ll all still pass for one version or another of a traditional doner kebab.

The What the Pitta Twist & the Vegan Kebab

Class over! Now that you know what the so-called “traditional” doner kebabs are composed of, let’s take a look at what’s inside our extra tasty vegan doner kebab, and what makes it possible.

As you already know, there are no animal products anywhere on our menu. And that’s perfect. We use a delicious, soy-based ‘meat’ that we think is even better.

We begin by marinating our plant-based ‘meat’ with our secret What the Pitta recipe – and all 26 different spices that are in it. Then, it’s fried up on a grill with just the right amount of oil. Our vegan kebab meat is firm enough to mimic real kebab meat, and able to hold its shape and flavour until your very last bite. Trust us – you’ll barely be able to tell that it’s vegan.

What the Pitta Chooses the ‘F Word’

Next up it’s the ‘f word’ (that’s ‘flatbread’ btw – shame on you). Sure, we’re the pitta experts, but turns out we know a thing or two about flatbreads too.

They’re made using simple, natural ingredients to make our yeast-free flatbread doughs, then we roll and cook them up to order so that it’s perfectly fluffy and fresh.

If there’s one takeaway here, it’s that every kebab is different. That’s why we give you plenty of options when it comes to your sauces and sides.

We roll out your freshly baked flatbread and top it up with our homemade hummus, as well as anything you’d like from our fillers (lettuce, onion, tomato, pickled red cabbage, pickled spicy peppers). Then comes the doner pieces, a drizzling of our homemade chilli hot sauce, and a smothering of our vegan house tzatziki, before it’s all wrapped up into one delicious burrito style meal.

And that’s how our vegan doner kebab is possible. You probably won’t even notice that it’s vegan. And when it’s this much healthier for you and the planet than a traditional doner kebab, why would you mind?

Visit your closest What the Pitta branch, and you’ll finally understand what makes a vegan doner kebab so special.

We use cookies on our website to give you the most relevant experience by remembering your preferences and repeat visits. By clicking “Accept”, you consent to the use of ALL the cookies.
Cookie settingsACCEPT
Manage consent

This website uses cookies to improve your experience while you navigate through the website. Out of these, the cookies that are categorized as necessary are stored on your browser as they are essential for the working of basic functionalities of the website. We also use third-party cookies that help us analyze and understand how you use this website. These cookies will be stored in your browser only with your consent. You also have the option to opt-out of these cookies. But opting out of some of these cookies may affect your browsing experience.
Necessary Always Enabled
Necessary cookies are absolutely essential for the website to function properly. These cookies ensure basic functionalities and security features of the website, anonymously.
Functional
Functional cookies help to perform certain functionalities like sharing the content of the website on social media platforms, collect feedbacks, and other third-party features.
Performance
Performance cookies are used to understand and analyze the key performance indexes of the website which helps in delivering a better user experience for the visitors.
Analytics
Analytical cookies are used to understand how visitors interact with the website. These cookies help provide information on metrics the number of visitors, bounce rate, traffic source, etc.
Advertisement
Advertisement cookies are used to provide visitors with relevant ads and marketing campaigns. These cookies track visitors across websites and collect information to provide customized ads.
Others
Other uncategorized cookies are those that are being analyzed and have not been classified into a category as yet.
SAVE & ACCEPT